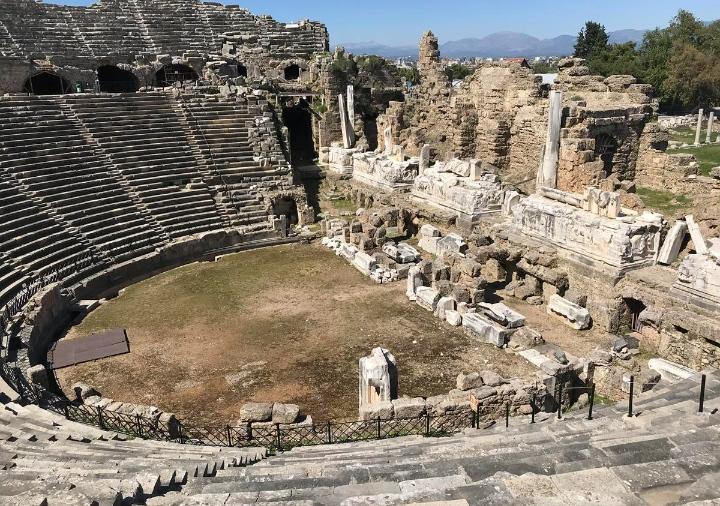 Which City is Side Turkey

Side, the most important port city of Pamphylia in ancient times, was built on a 350-400 meter wide peninsula located 80 kilometers east of Antalya and 7 kilometers southwest of Manavgat.

Side became a settlement center in the VII century BC. In the VI century BC, it came under the rule of the Lydian Kingdom together with the whole Pamphylia, and after the fall of the Lydian Kingdom in 547/46, it came under the rule of the Persians. The city preserved its freedom to some extent during this period and minted coins in its own name. Side, which opened its doors to the Macedonian king without any resistance during the Anatolian campaign of Alexander the Great (334 BC), later became one of the great coin minting centers established by Alexander. After Alexander’s death, Side, which constantly changed hands between the kingdoms of the Hellenistic Period, came under the sovereignty of the Ptolemies in the III century BC and the Seleucids in 215-189 BC. When the Seleucids were defeated in the war against the Romans, Pamphylia and Side were given to the Kingdom of Pergamon according to the Apameia Peace made in 188 BC. However, Side regained its independence after a while and lived one of the brightest periods in history.

Side, which is always preferred for summer holidays and has always worth discovering because it is a town from ancient times, is among the regions that should be visited and spent time. Side, whose history can be traced until 7th century BC, but is thought to have a much older history than this, was dominated by many empires such as Lydia, Persia, Rome, and Seljuk. Since the word Side means “Pomegranate”, it is a settlement that is thought to date back to the Hittites with the researches made on this region together.

According to a legend, the goddess of nature and fertility Side and her daughter go to the shores of Manavgat (Melas) to collect flowers. Side, who plucked a flower with very eye-catching colors for her daughter, cannot move at once and her feet turn into tree roots. It is rumored that the flowers picked by Side belong to a goddess who is the protector of people. Understanding her mistake, Side said, “I will give fruits the color of blood and become the symbol of life “. According to legend, Side has turned into a pomegranate tree and the symbol of the region has been pomegranate for centuries.

Ancient City of Side

Nymphaeum, which is also known as ‘Nine Streams’ at the entrance of Side Antique City and whose source is the Manavgat Stream, is a very imposing structure. It is estimated that this building, which was built to have a height of 20 meters, shrank to 12 meters as a result of earthquakes in the region.

Side Antique Theater is one of the structures that even people who did not go there heard the name from far. It is known that this structure, which is encountered after passing the fountain and arches while entering the ancient city, has a height of 20 meters and a capacity of 15 thousand people. When typical ancient theaters were built on a mountain or a mountain rears in Turkey, Side Ancient Theater was built on aqueducts.

One of the main reasons for the construction of these theaters with special methods is the idea of ​​protecting the audience in the struggles between gladiators and wild animals.

At the end of the buildings called Columnar Street during the ancient Side tour, there comes the Temple of Apollo. This temple, named after Apollo, known as the god of light, beauty and art, is thought to have been built in 150 A.D. This temple is located in the middle of the Byzantine Basilica on the one hand and it is thought that a part of the temple was deformed or dismantled during the construction of the basilica.

The damaged building was restored after. In addition to the temple, which attracts great attention to those who want to watch the sunset, especially in the evening due to its location by the sea, it is possible to see the temples previously dedicated to the Mother of the Gods Kybele and the Moon God Men in this region.

For Athena’s sake, known as the chief goddess of Side, there monumented 6 columns on the short side and 11 columns on the long side of the structure located in the east of the harbor. This structure, which is larger in size than the Temple of Apollo, was renovated in 2 A.D. for goddess Athena, the ruler of the city and sea trade.

This ancient city, which should be visited by those who want to explore a different history with a wonderful view of nature, was established in the name of the Syrian King Selevkos Nikator, who was the successor of Alexander the Great. There are two Hellenistic mosaics in the city, whose ruins were unearthed in the 1970s. Most of the historical buildings in the city belong to the Hellenistic and Roman periods.

The Mosaic of Seven Sages